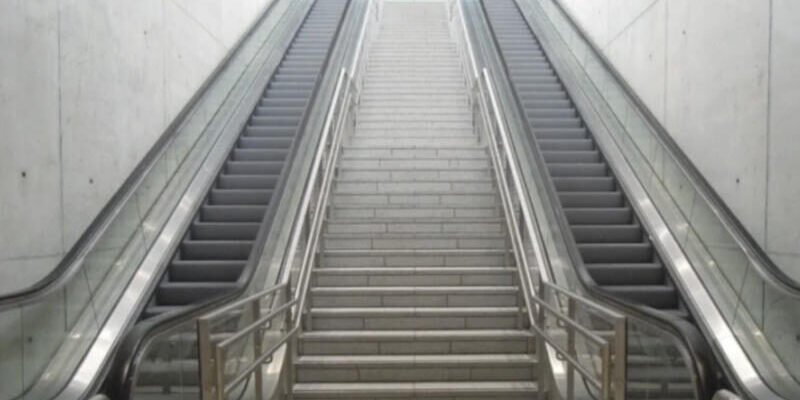 How a trip to the airport helped me explain talent

While on the drive to the airport I was involved in a conversation with a former client, now friend, that had invested in a small start-up firm.   He commented that he was concerned that the young entrepreneur, whose business he had invested in, lacked the talent needed to lead the organization.  I responded by asking did he know he actually lacked the talent for leadership or did he actually lack competency for leadership.   My friend gave me that half head cocked puppy dog look and said, “What’s the difference?”  I must have looked equally confused and said, « There’s a huge difference. »   I was trying to explain that competency is the acquisition of a skill and talent is merely your predisposition to achieving competency.  This conversation carried on as we were walking through the airport and in front of me was the scene I have witnessed in every airport I have ever been in, it was the route to go to the next level.  The up escalator on the right, the stairs were in the middle and the down escalator on the left.

This is where the airport helped me explain talent to my friend.

Pointing out the scene in front of us I explained it this way. « You see the escalators and stairs over there.   Think of talent and competency this way.   We all start on this level and the goal is to achieve competency which is the next level up.   Now you can take three paths to get there and those paths represent your talent level.   If you have a high level of talent for the competency you are trying to achieve then it is kind of like riding up the up escalator.   There is just not a lot of work involved and your path to competency requires little effort and it is fairly quick.   If your talent level is fairly normal, like most people, your path to competency is like walking up the stairs.  You can certainly get there, and it is not difficult, but it does require some effort and work on your part.   Now if your talent is low for the competency you are trying to achieve then it is like running up the down escalator.  You can get there but you are going to work hard, it is going to take longer, and if you stop or give up you are likely going back down. »

What about the entrepreneur?

After sharing the analogy my friend quickly wrapped his head around the difference but now had a different problem.   His next question was, « How do I know if it is a talent issue or a competency issue? »   I suggested we have the young CEO complete our talent assessment and take a look at the results.  He actually scored fairly well on talents related to leadership skills and it was easy from that point to build a coaching and development plan.   Not surprisingly the young man accelerated his leadership capabilities quite quickly. My friend’s reservations about him being the right person for the job have diminished.  Now instead of talking about bringing someone in to run the company they are in active conversations about continuing to build out his leadership skills.